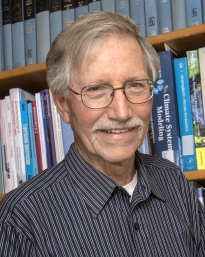 Stephen E. Schwartz is a senior scientist emeritus at Brookhaven National Laboratory. His current research centers on the influence of energy related emissions on climate, with a focus on the role of atmospheric aerosols and the budget of carbon dioxide.

Schwartz is a fellow of the American Association for the Advancement of Science and of the American Geophysical Union, and is recipient of the 2003 Haagen-Smit Award for an “outstanding paper” published in the journal Atmospheric Environment. In 2006 he received the BNL Science and Technology Award for distinguished contributions to the Laboratory’s science and technology mission, and in 2010 he received an Outstanding Leadership Award from the U.S. Department of Energy. In 2020 his research on atmospheric aerosols and leadership in aerosol research were recognized by the International Aerosol Fellowship Award, which is given once every two years to up to two individuals by the International Aerosol Research Association.

In his research at Brookhaven National Laboratory, Schwartz developed methods to describe the rates of reactions in clouds that lead to production of acid rain. Schwartz’s research exerted a major influence on the drafting of the acid deposition section of the 1990 Clean Air Act Amendments. More recently, Schwartz has been focusing on microscopic and submicroscopic aerosol particles, which influence a variety of atmospheric processes, from precipitation to climate change.

Schwartz is author or coauthor of over a 140 papers published in peer-reviewed scientific journals. He was editor of Trace Atmospheric Constituents published by Wiley in 1983 and was co-editor of a three volume series Precipitation Scavenging and Atmosphere-Surface Exchange, published by Hemisphere in 1992. He is coauthor of Sea Salt Aerosol Production: Mechanisms, Methods, Measurements, and Models — A Critical Review, published by the American Geophysical Union in 2004. Schwartz’s research has been quite influential. In 2001 he was one of some 350 scientists worldwide to be designated a “highly cited researcher” in geophysics by Thomson-ISI (then the Institute for Scientific Information).

Schwartz has served on numerous national and international panels. As a member of the Committee on Atmospheric Chemistry of the American Meteorological Society he was principal author of that society’s 1989 statement on Acid Deposition, and as a member of the Climate Change Panel of the American Geophysical Union he contributed to that organization’s seminal 1998 Position Statement on Climate Change and Greenhouse Gases. He has been a contributing author to the 1992, 1995, 2001, and 2007 assessment reports of the Intergovernmental Panel on Climate Change.

Schwartz has served on the editorial boards of several atmospheric and chemical journals including Atmospheric Environment (of which he was North American editor for Urban Atmospheres), The Journal of Geophysical Research (Atmospheres), Tellus B (Chemical and Physical Meteorology), and the International Journal of Chemical Kinetics. He has twice been the recipient of the Editor’s Citation for Excellence in Refereeing for the Journal of Geophysical Research – Atmospheres.

Stephen Schwartz lives with his wife, a retired junior high school teacher, in Center Moriches, NY, on the south shore of Long Island, where he enjoys canoeing and nature photography on the Forge River. He and his wife have two grown children and four grandchildren. They have a solar photovoltaic system on their house, and Schwartz drives a hybrid gasoline-electric car.